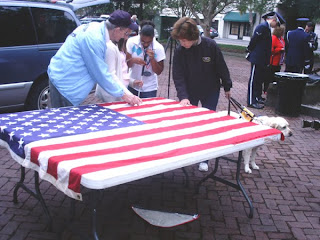 Our president, Nancy More, joins one of Charleston’s blind youth in taking a hands-on look at our country’s flag. October 15, 2009 marked the first time that many area blind and visually impaired folks had ever really “seen” the American Flag, one of many exhibits featured at a special celebration of White Cane Day, 2009 in Charleston, SC.

October 15th is recognized internationally as White Cane Safety Awareness Day. This day is set aside to recognize the white cane and to teach sighted people about the purpose and use of the white cane by the blind.

Dixie Land Guide Dog Users proudly assisted in hosting this White Cane Day celebration, with Laurel Jean serving as the event’s Master of Ceremonies. Blind folks of all ages met at the Visitor’s Center on Meeting Street Downtown. After a walk to Francis Marion Square, the program continued with a narrated presentation of The Colors. Elementary and secondary students were awarded for their participation in a story contest featuring the long, white cane. Congratulations to First Place Winner, Brianna Murray, who received a full scholarship to our Top Dog, 2010 as part of her prize package!

After the program, folks were treated to snacks and several different exhibits, including the flag shown above, with raised stars and stripes which could be touched! This exhibit was inspired by Taylor, who took his first “hands-on” look at our country’s flag when last summer’s Camp Lakewood Vacation Bible School for blind youth toured Grace United Methodist Church.

The Color Guard honored the ministry of Music By Laurel Jean, producer of Camp Lakewood, presenting her with this White Cane Day Flag at the conclusion of the day’s festivities.

Our thanks to the Charleston Chapter of the American Council of the Blind for allowing Dixie Land Guide Dog Users to help sponsor White Cane Day, 2009. On this day, we celebrated God’s gifts: not only our independence as blind individuals, but also the freedom that we know as citizens of The United States of America.
Posted by The Dixie Land Guide Team