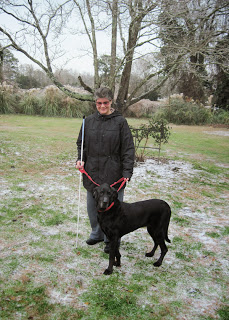 Pictured here is our Secretary/Treasurer, Laurel Jean Walden, with her beautiful, black Lab mix Zettie on a snowy day in Charleston, SC. Zettie passed away on Wednesday. The following is posted in Zettie's memory by our President, Audrey Gunter.

She was a beautiful girl-tall, tantalizingly tall; long and sleek with gorgeous, shiny, silk-like hair; captivating big, brown eyes-one could be consumed by those eyes; soft, unbelievably soft ears and an attitude that quickly told you that you were in the presence of royalty!  She was, after all, the Empress Queen Diva!  She was the boss and she had no problems letting folks know it, either.

She was also a character-goofy and clumsy and just so-so funny; but majestic at the same time.  She'd blunder into a room, tail wagging, knocking things about with every step; look around for just that perfect person; plow through anything in her way; take that regal, long nose of hers and place it just under one's hand.  Then she'd throw her head up in the air, taking the hand with her!  That was her way of introducing herself.  She was just as genteel as she was rambunctious, though. Zettie could have very easily passed as a guide dog but made sure that she was never mistaken as a service dog.  I was always amazed how well Zettie interacted with the many, many service dogs she came into contact with over the years.

As big as a small horse and stubborn as a large mule, she was such a loud, demanding yet ever-so faithful soul-with the wisdom of an aged sage.  She took on other's responsibilities like a mother hen.  She appointed herself as attendant to others and made sure those in her charge knew she was the boss!

Loyal, faithful, loving, exuberant Zettie!  What a girl she was!  She crossed over Wednesday with her mom, Laurel by her side.  Zettie is running through the Heavens right now-free from pain and hurt.

Zettie and I had this thing we did with me shaking my fist at her saying, "I'm gonna give you one of these right across the kisser!"

She'd always prance on those two big front feet and give me that playful growl of hers that would make anyone smile.

God continues to bless us in many ways.  I know He blessed me by knowing sweet Zettie and I believe the entire world is a bit better for having her among us.