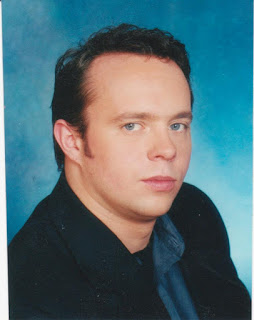 Dixie Land Guide Dog Users Paws 2
Say "Thank You!"
In Memory of Wayne Fridrich Jr.
As most of you already know, Dixie Land Guide Dog Users, Guide Dog Users of Florida and Georgia Guide Dog Users, with the generous sponsorship of the Association for the Blind and Visually Impaired Charleston, held our bi-annual Southeast Regional Top Dog Workshops here in Charleston, SC in January of this year.  We hosted over 150 registrants, including 9 guide dog schools and over 90 dogs from across the continental USA.  In addition to these we also were privileged to have dozens of much-needed volunteers to help with whatever was needed at the time.  One of our beloved members and a former puppy raiser for Fidelco and Southeastern, Peggy Sudol was our Volunteer Co-coordinator.
Peggy solicited assistance from many of the organizations with which she was associated and, when that list was exhausted, she began to recruit family members.
Wayne Fridrich, Jr., Peggy's son, traveled from his home in Connecticut specifically to help us.  In fact, when he heard of an impending treacherous snow storm approaching his area, he intentionally re-scheduled his flight a day ahead in order to avoid the blizzard!
When his plane landed, Wayne hit the ground running!  He and his step-dad, Mike, immediately began transferring all the items we'd been accumulating over the past several months to the hotel.  He helped Mike and Russ create and maintain our "portable relief area", helped fold t-shirts and bandanas; stuffed our registration backpacks; helped with registration and in the Hospitality Suite; assisted with foot traffic in the hotel lobby and Exhibit Hall and even pitched in at dinner times.  There was no job too small for this nice young man!
Although Wayne was stricken with a serious health condition for several years, he'd fought it valiantly.  Unfortunately, however, Wayne lost his battle and went to live with our Lord a few months ago.  Please join with me and my fellow Dixie Landers as we offer a prayer of thanksgiving to God for the privilege of having known Wayne-even if it were for such a short time and another prayer for Peace for Peggy and her family as they mourn his passing.
Thanks, Wayne, for all you did and thank you, God for Wayne!  Rest in Peace, my friend!
From our President — Audrey Gunter
Posted by The Dixie Land Guide Team