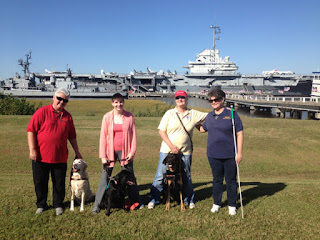 It was a beautiful, sun-drenched morning here in South Carolina.  A few Dixie Landers and friends joined together at Patriot's Point Naval Museum in nearby Mount Pleasant, to learn, fellowship and, perhaps even teach while spending a couple of enjoyable hours aboard the USS destroyer Laffey, the World War II aircraft carrier, Yorktown and the USS submarine, Clagamore, all of which now part of the Patriot's Point Naval Museum.
We were met at the park's entrance by Cindy C.; Cindy L.; Molly and Melissa who graciously and patiently offered to escort us all around the premises.  The very first piece of precious memorabilia we stumbled across was their tribute to the 995 South Carolinians who gave their lives during the Viet Nam war.  Surges of pride, patriotism and gratitude embraced us as we ever so gently ran our fingers across the multitudes of replicated dog tags hanging on their wall. We all agreed how blessed and fortunate we were to live in such a magnificent country. 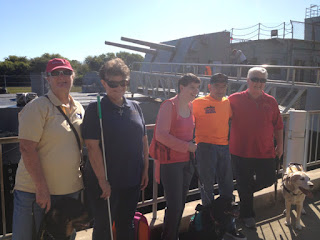 Soon Cindy C. began to tell us about a handful of volunteers who had donated their time and efforts that entire week towards the up-keep and appearance of the destroyer Laffey.  Before long a couple of those dedicated fellows were introducing themselves to us and telling us how they'd all been connected to that destroyer at one time or another.  We all thanked them for their service and remarked how it was through their efforts that we were even allowed to be there. N Then, it happened!  From out of no where walked "Ari, the Greek", or, at least that's how they introduced him.  Ari, now living with his wife and family in Portland, Oregon, proudly donned a bright orange shirt that had printed on the front, "USS Laffey Plankowner".  He explained that he had been assigned to "her" when she was commissioned back in 1943 and spent 2 years aboard during World War II.  We were all spellbound as Ari began a very special guided tour of "his" Laffey.
Dropping my harness handle and clutching Jessie's leash, I quickly grabbed Ari's left arm as he began to show us around.  Suddenly it was June 6, 1944 and we were off Utah Beach during the invasion of Normandy!  Surrounded by various other ships in the United States Naval fleet and umbrellad by a cloud of US bombers, we could almost hear the guns blazing, bombs bursting and guns blaring.  Ari affectionately escorted us from stern to bow; lee and port side, taking my hand and placing it on various areas of the ship that had received damage.  His voice was filled with pride as he pointed out the "hedgehogs"; gunnery deck and radar equipment.  He stopped at one point to tell us a story or two about a couple of shipmates during the invasion and to allow us an opportunity to feel where a Japanese Kamikaze struck her dead on during the battle of Okinawa!  It was mind-boggling to know that even after all that, the Laffey still continued on.  No wonder she's known as "the Ship that Would Not Die"!
I learned that Ari had spent over 2 years aboard the USS Laffey, most of which engaged in warfare.  How difficult that must have been for all of them-especially Ari.  I asked if he'd been given any opportunity for worship during that time and he sadly replied that they'd had no chapel on board, which was really hard for him since his dad had been a Priest. 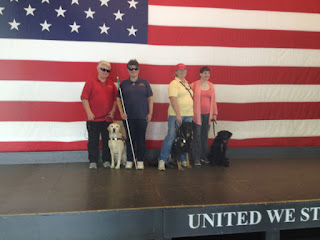 Much too soon our tour of the Laffey was over and it was time to visit the Yorktown.  There was no comparison between the two in size.  One was a destroyer and the other an aircraft carrier.  One was the size of a city block and the other, an entire city!
The Yorktown was commissioned in 1937 and fought during World War II until she was sunk in 1942.  She now sits proudly in the shadows of the newly erected Ravenel Bridge in the Cooper River just outside of Charleston, SC.
Because of time constraints, our tour of  the Yorktown was somewhat rushed but we did get to visit the flight deck, hanger deck and a few other points of interest. 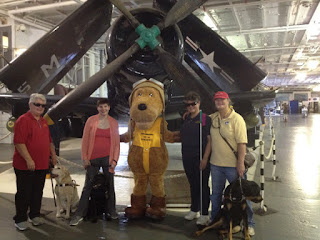 As we passed their mess hall, we could actually hear the tinkling of glasses and clanking trays just like it was so very many years ago when that ship was fully manned.  Our lunch at Sticky Fingers was delicious and we even got to have our photos made with their mascot, Scrappy! 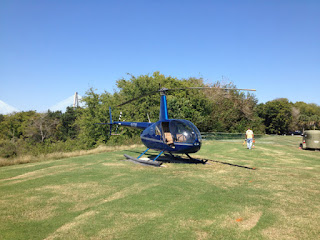 Before long we were headed towards the gangplank and the parking lot. We'd have to see the submarine Clagamore another day.  But wait!  Some of us still had one more thing they absolutely had to do.  Within a few moments, Kimberly Taylor, Laurel Jean Walden and Kimberly's friend Cindy were jumping in the tour helicopter and flying over Fort Sumter and the Battery.
"This is the best day ever," Kimberly said as she exited the chopper area.
We'd only spent 4 hours visiting Patriot's Point, but we'll have a lifetime of memories from our time there.  Thank you, Cindy C,; Cindy L.; Melissa and Molly for an incredible day and a very special note of appreciation goes out to all of the brave men and women who have served or are now serving in our US military, especially "Ari, the Greek."
Of course, none of this would have been possible if not for our driver, Libby who generously donated her time and vehicle to transport us.  God bless you all and God bless the USA!
Posted by The Dixie Land Guide Team